Learning target: Explain how cells take in nutrients to provide the cell with energy.

A Closer Look at Cell Membranes 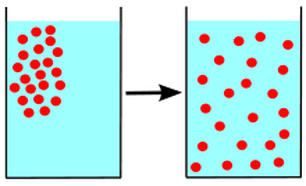 The cell membrane acts as a barrier between the inside and outside of the cell.   There are two processes that allow for the transportation of molecules into and out of the cell (Active and Passive Transport).  In grade eight, we concern ourselves only with passive transport (diffusion and osmosis).  You will study Active Transport in grade nine.

As the video says, humans have semi-permeable membranes.
Some molecules are able to pass into and out of the cell without any energy being used.  Gases such as oxygen and carbon dioxide fit this category.  When there is a high concentration of these gases on either side of the cell membrane, they will pass through the membrane until there is an equal concentration on both sides.  This process is called Diffusion.
The diffusion of water molecules is so important to the human body that it is given it’s own special name, Osmosis.The following video shows an egg experiment that can be conducted in class that demonstrates the movement of water out of an egg (when placed in a sugary liquid) and the movement of water back into the wrinkled egg when it is resubmerged in pure water.

This is my communication tool to parents & students to keep them informed of what we are doing in class. Contact me at: tbloch@mywwps.org

Powered by WordPress | Hosted by Edublogs | Protected by CloudFlare